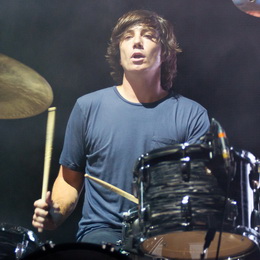 Hello. My group is savage dictionary. What we are do is to study our favorite artist(singer) or group. The group i will be taliking abnout is Maroon 5. Maroon 5 currenty has 6 members. they are, Adam Levine, Jesse Carmichael, Mickey Madden, PJ Morton, James Valentine, Matt Flynn. This band originated from Los Angles, Califronia 1999. here is some information on each member's history.

Adam Noah Levine was born on March 18, 1979, in Los Angeles, California. He formed his first band, Kara's Flowers, while attending the private Brentwood School with friends and fellow students Jesse Carmichael, Mickey Madden and Ryan Dusick. The band released its first album, The Fourth World, in 1997, as high school seniors. Kara's Flowers released one single, "Soap Disco," and appeared on an episode of Beverly Hills 90210, before finding success elusive and breaking up.Levine and Carmichael left Los Angeles for Long Island, New York, to attend Five Towns College, a music and performing arts school. Living in New York exposed the pair to an entirely different music scene, involving large doses of R&B and hip-hop, and Levine would later say that living in New York had a large impact on his musical point-of-view. Levine and Carmichael dropped out of Five Towns and returned to Los Angeles in 2000. There, they reunited with the other members of Kara's Flowers and added a new member, guitarist James Valentine (Carmichael moved to keyboards). The band then changed its name to Maroon 5 and released its debut album, Songs About Jane, in 2002. Two years later, after slowly climbing the charts, the album went platinum. Maroon 5 earned their first Grammy Award (best new artist) in 2004. The band would go on to win Grammys for best pop performance in 2005 and 2007.

Maroon 5 keyboardist Jesse Carmichael was born on April 2, 1979, in Boulder, CO. His family relocated to Los Angeles and Carmichael, initially a guitarist, began playing music with some junior-high friends, singer/guitarist Adam Levine and bassist Mickey Madden, under the influence of groups like Nirvana and Pearl Jam. After the final 1994 addition of Ryan Dusick on drums, the alternative pop/rock band Kara's Flowers were born. The quartet scored a record deal with Reprise, released a mediocre album, and was released from its contract all in a matter of years. Following the termination of its deal, the band went on hiatus and Carmichael headed to New York with Levine to attend Five Towns College on Long Island. While there, the guys were exposed to a whole new music scene and absorbed new influences like hip-hop, soul, gospel, and R&B. Not only did the two friends gain a fresh perspective on songwriting at school, but Carmichael also started playing the keyboards. They only lasted a semester before dropping out and heading back to California rejuvenated and inspired to add a new groove-based element to their band's rock template. After adding in new guitarist James Valentine -- effectively moving Carmichael over to keyboards -- and scoring a new deal with Octone Records, the newly christened Maroon 5 were officially up and running; their debut album, the aptly titled Songs About Jane, was soon completed. Released in June 2002, the album sold steadily over the next couple of years and was certified platinum by 2004. Maroon 5 scored several hit singles, won two Grammy Awards, and toured constantly in support of it.

Bassist Michael "Mickey" Madden was born on May 13, 1979, in Austin, TX. He began playing music with junior-high friends guitarist Jesse Carmichael and singer/guitarist Adam Levine under the influence of groups like Nirvana and Pearl Jam, and after the final 1994 addition of Ryan Dusick on drums, the alternative pop/rock band Kara's Flowers were born. The quartet scored a record deal with Reprise, issued a mediocre album, and was released from its contract all in a matter of years. Following the termination of its deal, the band went on hiatus, during which Madden briefly took some classes at UCLA. Before long, however, the guys had reconvened back in Los Angeles to begin writing new songs that featured more groove-based elements than their past songs. New guitarist James Valentine was ultimately added into the fray (moving Carmichael over to keyboards) and the pop/rock group renamed itself Maroon 5. After scoring a new deal with Octone Records and writing a bunch of songs directly inspired by Levine's recently failed relationship, Maroon 5 released their debut album, the aptly titled Songs About Jane, in June 2002. The album sold steadily over the next couple of years and was certified platinum by 2004. Maroon 5 scored several hit singles, won two Grammy Awards, and toured constantly in support.

PJ Morton (born as Paul Morton, Jr.; March 29, 1981) is an American R&B singer-songwriter, musician, and record producer. Since 2010, he has been a keyboardist for the pop rock band Maroon 5. On March 27, 2012, Morton released his debut solo EP, Following My First Mind, through the record label Young Money. Adam Levine was featured on the lead single, "Heavy"; other musicians on the EP include Lil Wayne, Jazmine Sullivan and Chantae Cann. On May 14, 2013, Morton released his first major-label debut album, New Orleans. In 2016, he released his mixtape Bounce & Soul Vol. 1 in March and the Sticking to My Guns EP in July.

James Valentine is best known as the guitarist for Los Angeles-based pop/rock outfit Maroon 5. Hailing from Lincoln, NE, he was born on October 5, 1978, into a Mormon family, attending church on a regular basis while growing up. First learning piano as a child, Valentine briefly tried out the drums before finally picking up a guitar and falling in love with it. He was a natural and was invited to play with the University of Nebraska jazz ensemble as a high-school student; in addition, he won plenty of music-related awards over the years and was offered various scholarships upon graduation. Valentine played in a few area bands as a teenager, and eventually relocated to southern California in 2000 with his band, Square. It was around this same time that the band Kara's Flowers were reexamining their musical direction and demoing songs for their new label. Valentine was introduced to the group through mutual friends, and though initially just asked to be their guitar tech during recording sessions, was ultimately extended a formal invitation to join. Valentine subsequently made his exit from Square, and thus completed the newly christened Maroon 5. Writing a slew of songs directly inspired by lead singer Adam Levine's recently failed relationship, Maroon 5 released their debut album, the aptly titled Songs About Jane, in June 2002. The band's popularity steadily increased; by mid-decade, they had risen to the forefront of popular music.

Drummer Matt Flynn spent time behind the kit with the B-52's and Gavin DeGraw prior to his work with pop/rock outfit Maroon 5. He initially stepped in on a temporary basis in late 2004 to help out the band after original drummer Ryan Dusick injured himself from constant touring and playing and was unable to perform. Flynn was called to learn the band's songs in just a couple of nights, and wound up sitting in with Maroon 5 for over a year before becoming a permanent member of the group in September 2006, after Dusick's injuries did not heal. His recording debut with the band was on their 2007 sophomore album, It Won't Be Soon Before Long.